Lindsay Tia- A Handbag Designer with a Purpose

Bravery, empowerment, inspiration; these qualities represent the Lindsay Tia brand, a line of totes and clutches made in Massachusetts and designed by a 25-year-old firecracker of a young woman. Her story is one of which many would dream, but very few would actually have the ambition and fortitude to realize.

At six years old, cute little Lindsay Tia Reilly learned to sew on her grandmother’s sewing machine. Then, at age 10, her mother enrolled her in a local sewing class. Barely a teenager, when most girls were simply daydreaming of their futures, 14-year-old Lindsay ensured her future dreams would be a reality by hand sewing her handbags on a ping-pong table in her parent’s basement in Quincy then selling them at a local salon in Quincy Center.

That’s one ambitious and hard-working teenager, a teenager with a purpose.

Today that purpose is flourishing and is the foundation of her popular line of totes and clutches. We caught up with Lindsay in South Boston to learn more about her story and brand. Do you remember The Little Engine that Could; that cute little spitfire of a train who climbed a mountain and helped a city of children because she believed she could? Well, that’s the type of heart that beats within Lindsay. If you tell her no, it only motivates her more. And just like that little blue train, she uses that motivation and her brand to help other people.

Throughout her teen years, Lindsay continued to build her brand. She would literally dream of her designs and then wake up and start sewing. She set up shops at craft fairs and bazaars, increasing her brand awareness.

Being the smart girl that she is, Lindsay headed to Lasell College of Fashion where she studied Fashion Merchandising. In August 2012, Lindsay Tia Reilly, officially created Lindsay Tia. (As a fun side note, Lindsay’s middle name came from the popular spot Tia’s by the Waterfront; where her parents first met in the mid-80s.) Paying homage to the two people who gave her the greatest support, she chose her middle name as part of the brand name. As Lindsay was sewing, setting up booths at fairs, and handling marketing, she started to realize if she could outsource the actual manufacturing, she could increase production and focus more on the creative and marketing aspect of the business.
But, one thing that was enormously important to this little girl with a big heart was that her bags not only be made in the U.S. but right at home in Massachusetts. It was important to Lindsay that she knew the people who were making her bags; knowing the people who are part of the process and journey is priceless to her.

So, she found great people in Northern and Southeastern Mass who understood her goals. And in 2012, Lindsay did her first run of 50 handbags, which she sold directly to the consumer online, at pop-up shops, and at charity events.

Only about a year after Lindsay finally had her bags in production, misfortune hit the Reilly family when Lindsay’s mom had a stroke, causing her to lose her sight temporarily in her left eye. For many, the unfairness of the situation might have been a reason to quit. Not for Lindsay. She showed true bravery, sticking by her mom’s side, and was motivated more than ever to succeed and help her family.

And that perseverance paid off for Lindsay when she got a contract with the USO, creating a line of patriotic totes, featuring the American flag. It was then that she truly solidified her mission and her products were recognized on a national scale. Lindsay helped to create the large-scale Bravery Bash at Granite Links, which benefited active duty servicemen. In fact, her red, white, and blue totes raised $18,000 for Mass Fallen Heroes. And here is where things really started to take off for Lindsay Tia. People started to send her their stories of bravery. They started tagging her on Instagram, and not just service people. People with cancer, people facing addiction, people who took seemingly simple steps that still required large amounts of courage. People were identifying bravery with the Lindsay Tia brand. 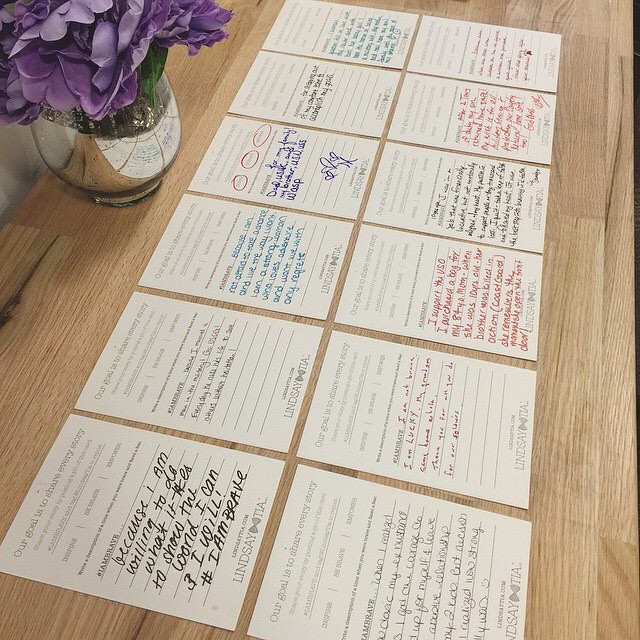 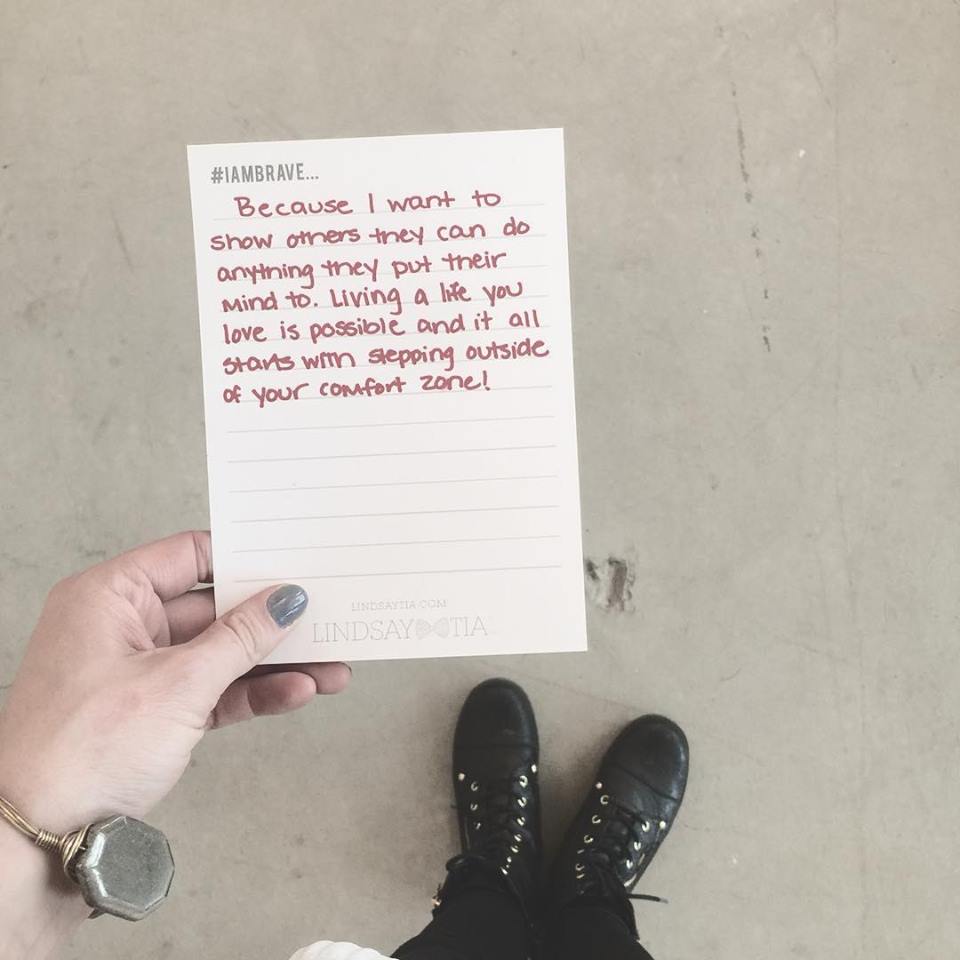 It was at this point that Lindsay grew her following and finally found her true purpose; to create socially responsible products and provide encouragement and inspiration to others. Today, each bag design has a meaning and a purpose.

Orders for the bravery brand started coming in from all across the country. People like Michelle Obama, Hillary Clinton, and Jill Biden ended up with bravery bags.

Today, Lindsay has added jewelry to her brand, made in Cranston, RI. And just like with her bags, she literally dreams of the designs when she is sleeping. She still loves to go to the manufacturer and talk with the team, feel the materials, enjoy their company, and be involved in the creation of her bags. All of her clutches are limited edition, with a new line every month. When you purchase one of her luxe clutches or cross-body bags, it is unique and special; just like Lindsay. 🙂

So, here’s our take on Lindsay Tia Reilly. She is the type of person we adore, and whose story is so special! She is proof that if you’re willing to put in enough elbow grease and not give up, your dreams will come true. We think it’s fitting that her most well-known bag utilize the image of the American flag. Because she’s shown us that the American dream is alive and well, and most importantly, within a generation that many have written off the ticket. It was refreshing and inspiring to see a young lady willing to put in hard work and perseverance to obtain her goals.

After spending the day with Lindsay, hearing her story, and understanding her mission, we’re pretty confident in saying Lindsay’s future success is “in the bag.” 😉

We originally posted this article in the fall of 2016. Since that time, Lindsay has started several other initiatives. Most notable is her well-curated fashion boutique (both online and in Milton, MA) “Shop the Cue,” which includes her collection of candles that have been flying into virtual shopping carts and then into peoples’ homes. Good luck, Lindsay! Thank you for being such a positive role model to future generations of female entrepreneurs. 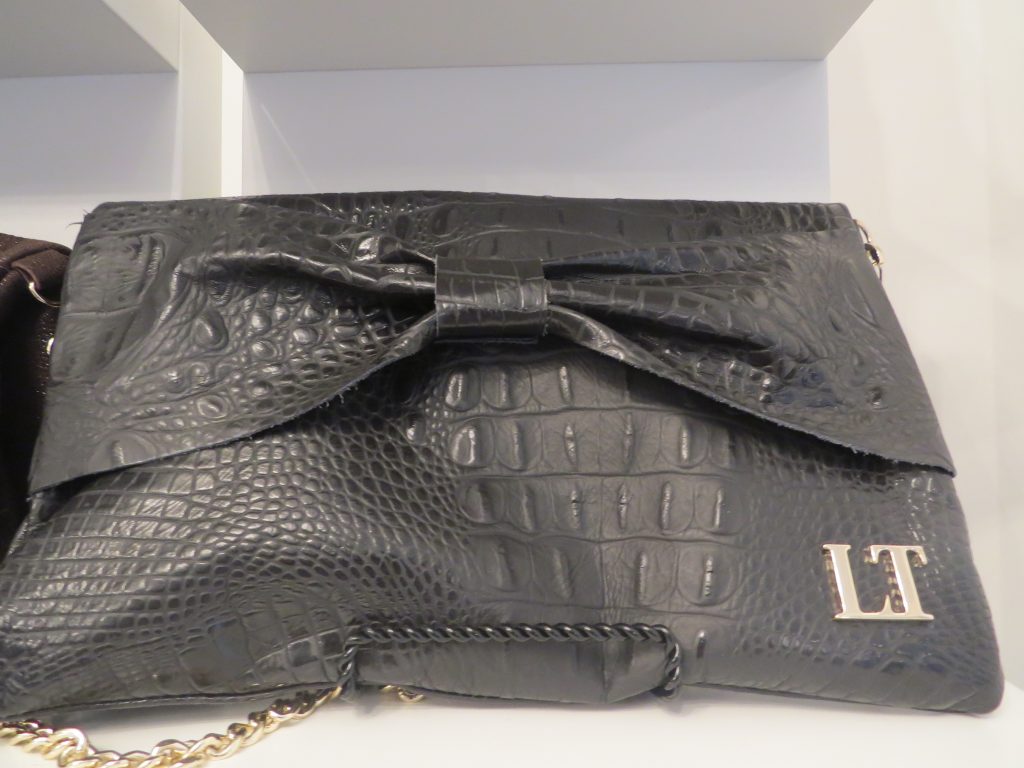